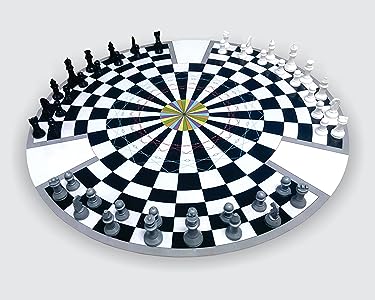 If you have played 2 player chess game then this will be even more exciting and will test your survival and killer instincts. Perfect for family time and outing games with three players. A cool gift for children.

Known as ‘Triwizard Chess’, it is India’s first chess game for three players and a tactical game that simultaneously tests each other’s survival and killer instincts. One player can checkmate two players at once !!

These three players’ chess becomes revolutionary in the game of chess because it requires another level of thinking and application of the mind.

The idea behind the game:

The game is more intense than regular chess. It is perfect for classrooms, family days or a game night with friends. The idea behind this game is to promote chess among the youth by increasing the number of players.

Through this, the viewer becomes a player and it changes the overall dynamics of the game. Each of the three players can watch each other’s movements on the board and make a similar decision.

Triwizard Chess is not just a game, it is an art that increases your concentration and level of focus. It also helps you to focus patiently on each task. When playing traditional chess or Triwizard chess, the player must have a high amount of concentration and focus. This can eventually lead to a person’s overall development.

A large number of people play chess in a professional manner, with some taking it as a hobby. These three players are committed to gaining chess traction and will be a big hit in Chess Masters!